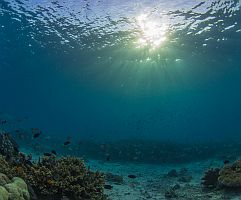 On 09/03/2016 there occurred in one of the most beautiful diving areas of the world, the Coral Triangle in the region of Sulawesi a total solar eclipse. That was my reason to combine a trip to the eclipse and diving holidays on Sulawesi. Unfortunately, this eclipse took place during the rainy monsoon season in most parts of the central path. I had to expect many clouds over the path of the central eclipse, especially the easy to access Indonesian islands Sumatra, Java and Kalimantan. As the western coast of Sulawesi hat  similar weather statistics  like the preferred regions of Halmahera, I have decided to observe south of the Sulawesi city Pasangkayu in the village of Pedanda.
The coordinates are -1° 15' 41.41" S  119° 18' 32.72" E or decimal: -1.261503° S 119.309089° E.

Here are the  data of the eclipse for  our observation place in the village of  Pedanda south of  Pasangkayu at the western coast of Sulawesi, 17 km north of the centreline, calculated with EclipseDroid: 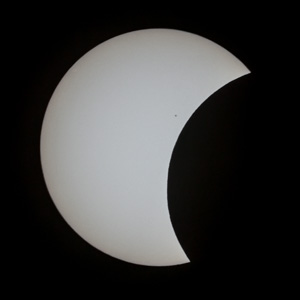 The eclipse could be observed was successful! While there were some thin clouds above the eastern horizon upon our arrival, but they vanished after the first contact completely so that we could observe the interesting phases of darkness under a perfect cloudless sky.
At our observation place we made several videos and photos with different focal lengths from 8mm fisheye to 500mm telephoto lens, weather recordings and measurements of the ambient brightness.

Unfortunately, no large sunspot groups were decorating  the solar disk  in the partial phases. 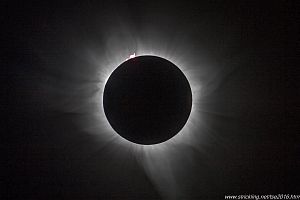 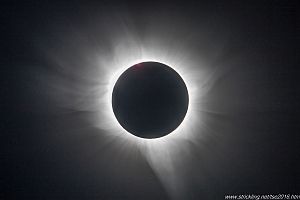 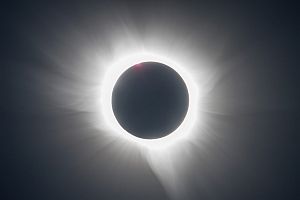 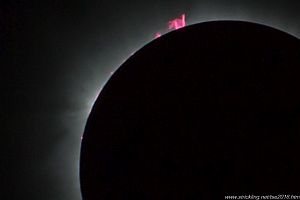 There was a  wonderful large  prominence visible at the northern Solar limb.
1/500 s ISO 100 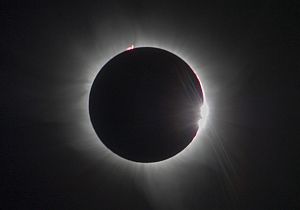 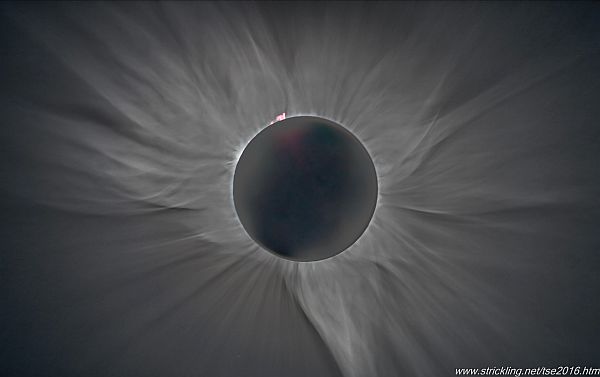 A contrast enhanced HDR Composit of the corona, using 9 exposures from 1/250 s ISO 100 to 1.0 s ISO 200.
Here the beautiful streamers are visible. Orientation North up, for the aspect in Indonesia with naked Eye rotate the image 91° counter-clockwise.

The position angle of the solar axis was -23.6° 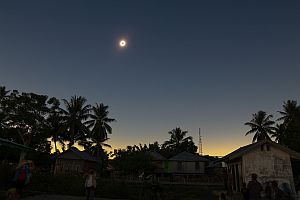 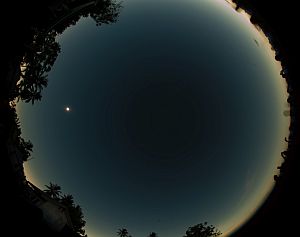 During the central phases of the eclipse we have had perfectly clear skies. 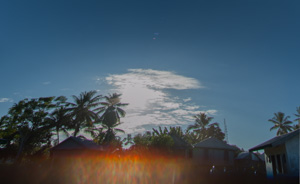 At the first contact there were thin clouds in front of the Sun. Detail of a fish eye image.

Shadow bands were visible, but very faint. I recorded a video, but the data are not yet processed.

With my 500mm 1/8 lens I made three exposures with 1/250 s, 1/30 s and 1/2 s exposure time at ISO 100 through a linear polarizing filter, each with an orientation of 0°, 60° and 120° resp. to celestial North. In the images below the red channel corresponds to 0°, green to 60° and red to 120° resp to North, rotation counter-clockwise. The polarizer was  held freehand in front of the lens, so an exact positioning was not possible. Click into  images to enlarge. 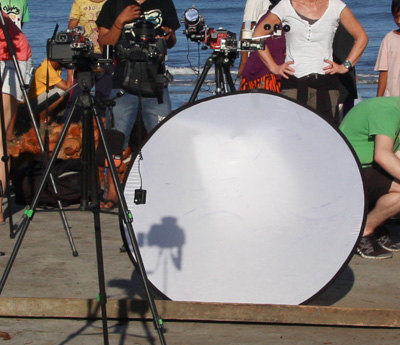 For registration of the shadow bands I filmed a projection screen at 25 fps in HD with the Panasonic Lumix F-1000 bridge camera. For a better visualisation of the faint moving bands, the projection surface was smoothed by averaging 12 frames, the result was subtracted from the original video and then the contrast was enhanced by a factor of 25. The inevitably visible image noise has been reduced with a double Gaussian blur filter.
The projection screen has had a diameter of 107 cm and was inclined 27 ° to the vertical towards the sun. I used a collapsible reflector screen. For more information and explanations on shadow bands read my shadow bands page.

Because the observation place was not exactly on the centreline, the position of the third contact was not exactly opposite of the second contact on the solar disk. Therefore, the orientation of the shadow bands after the third contact was a little different. They extend almost horizontally, according to the position angle of the solar crescent in the sky. After the third contact, the shadow bands were even fainter than before the second contact. The reason is probably the decreasing of turbulence and convection in the atmosphere.

Following some still images from the video. The inset is showing the solar crescent, as it would be projected on the screen (horizontally flipped photos). Click on the image to enlarge.

Thanks to Ulrike and Dr. Karl-Werner Kempf for kindly supplying their video equipment! 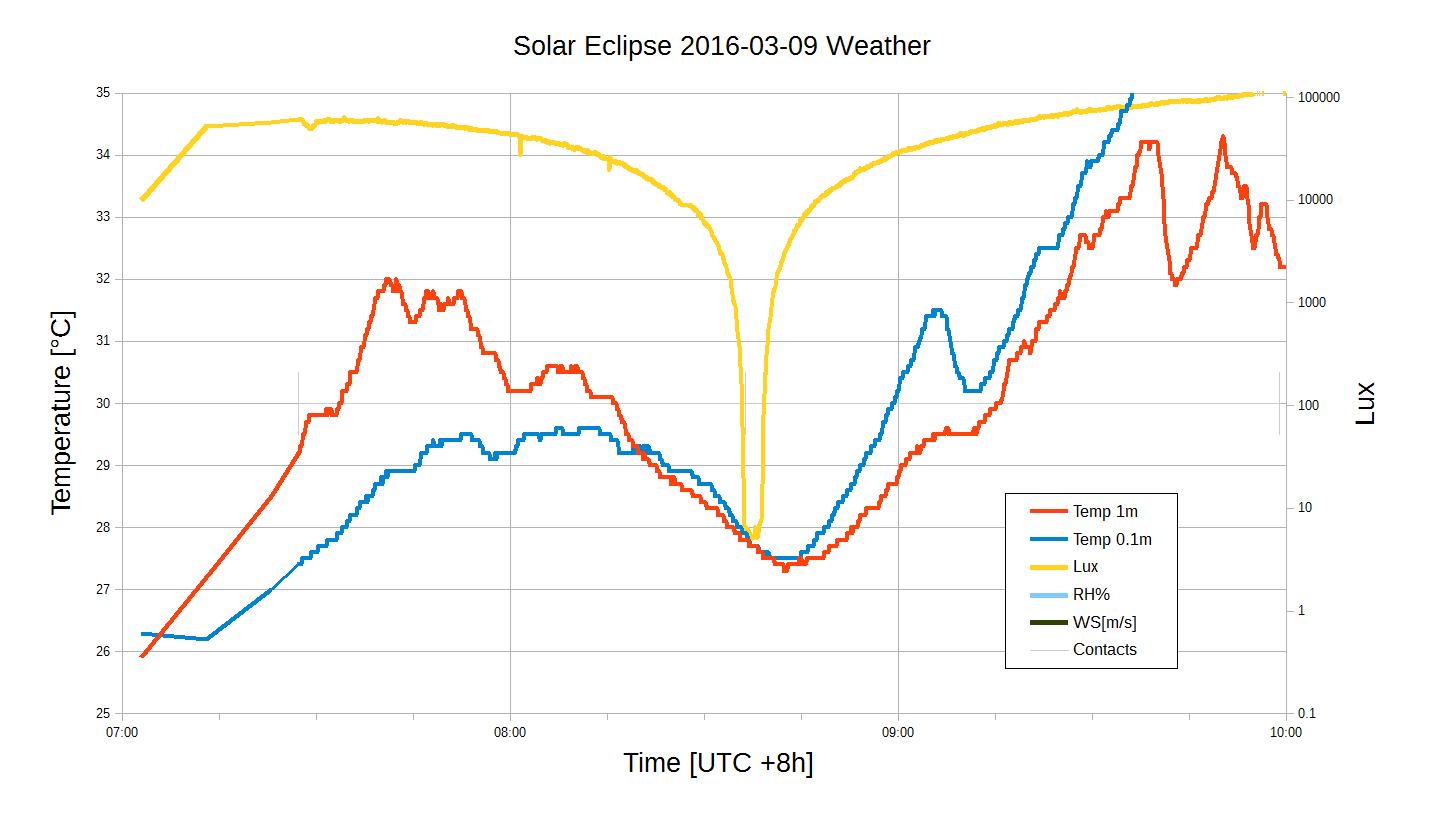 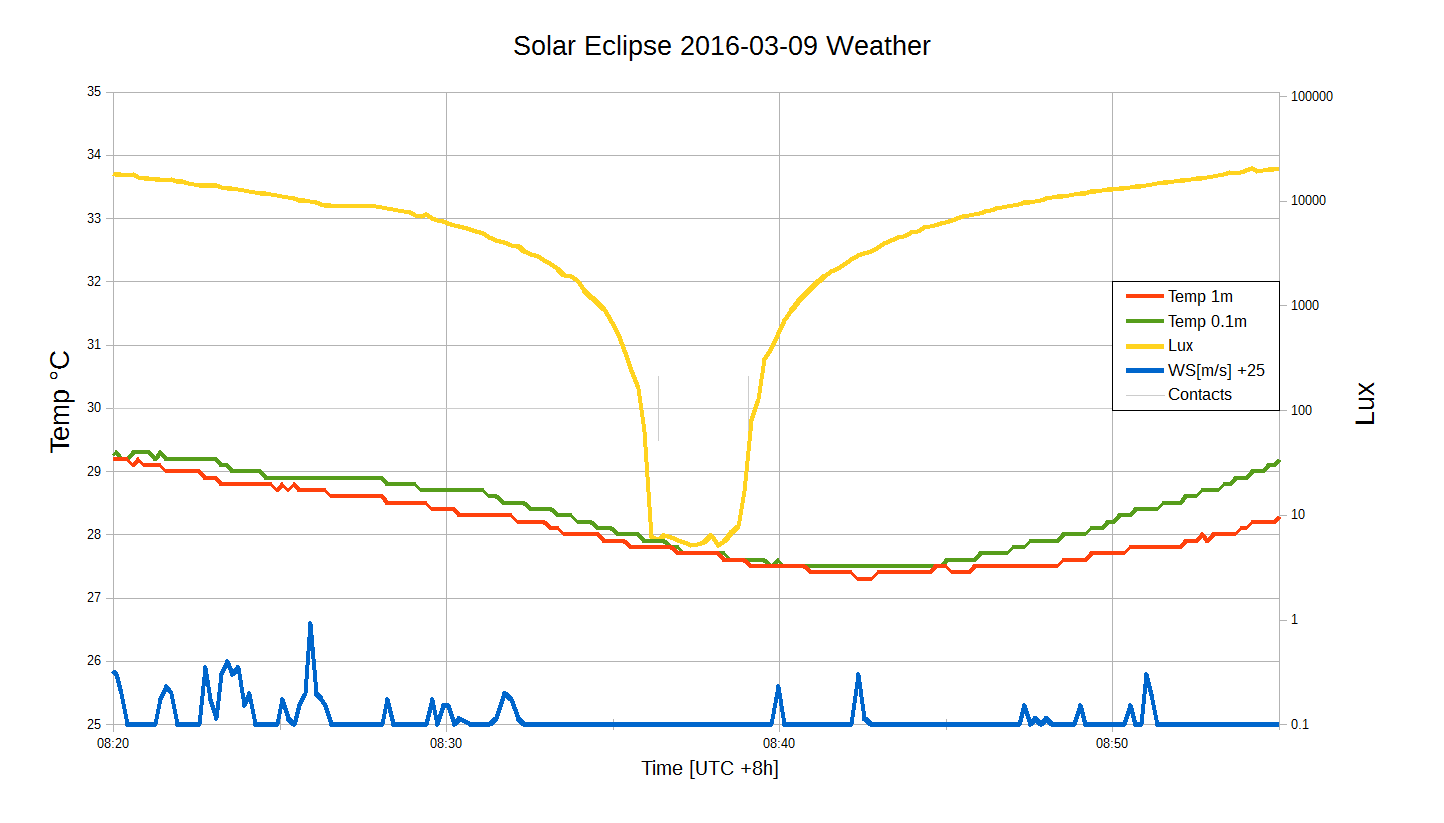 At our observation place I recorded the weather development with my mobile weather station, based on a C-Control unit. The Unit was placed 1 m above the ground, a concrete surface near the beach of Pedanda. The temperature in 1 m height decreased from a maximum of 32° C at 07:41 local time (UTC +8h), shortly after the first contact down to 27.3° C at 08:43 local time. This minimum was achieved 4 minutes and 30 seconds after the third contact. Afterwards the normal daily temperatures were quickly achieved again. I also made measurements near the ground (10 cm above the floor) and directly on the floor, but the latter were partially disturbed by direct sunlight.


Click onto the graphics to get a large image! 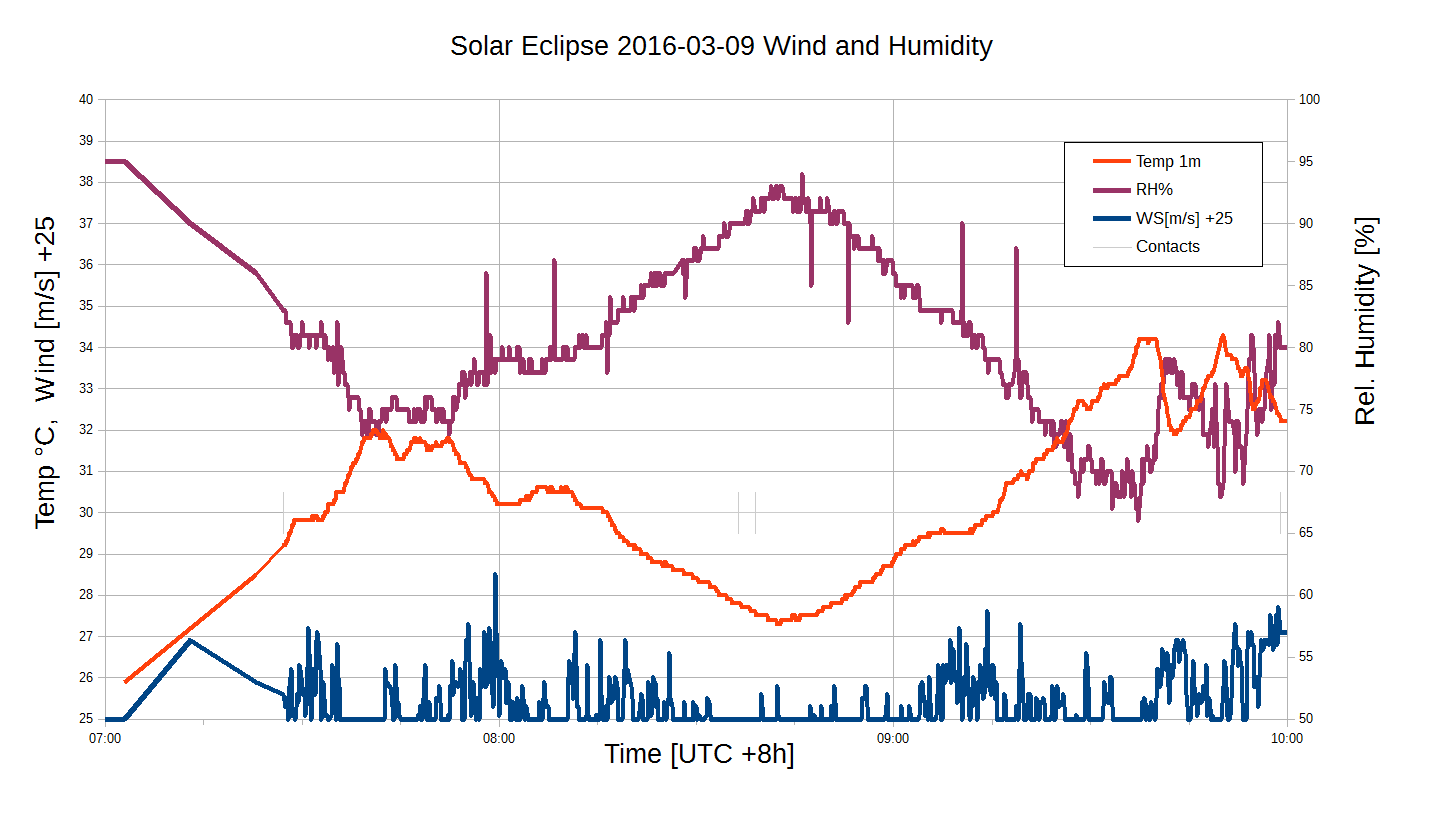 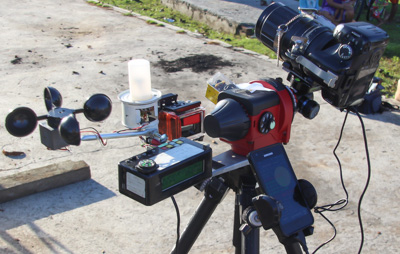 The humidity behaved as expected inverse to the temperature variation. From a minimum of 74% rel. humidity at 07:40 UTC + 8 hours the moisture increased parallel to the falling temperature up to 94% at 08:46. After the maximum it fell rapidly again according to the rising air temperature. An eclipse wind could not be registered. The wind was quite weak at eclipse day, around totality it came almost  to zero.

For temperature recordings I used shaded digital DS1621 sensors, for brightness a TSL230 chip,  for humidity an analogue HIH-4031 sensor and for wind speed measurements an hemispherical cup anemometer combined with a photoelectric sensor. It was mounted on my tripod with my EclipseDroid controlled 500 mm telecamera on the Sky Adventurer mount.

Download here a csv file of my weather measurements. 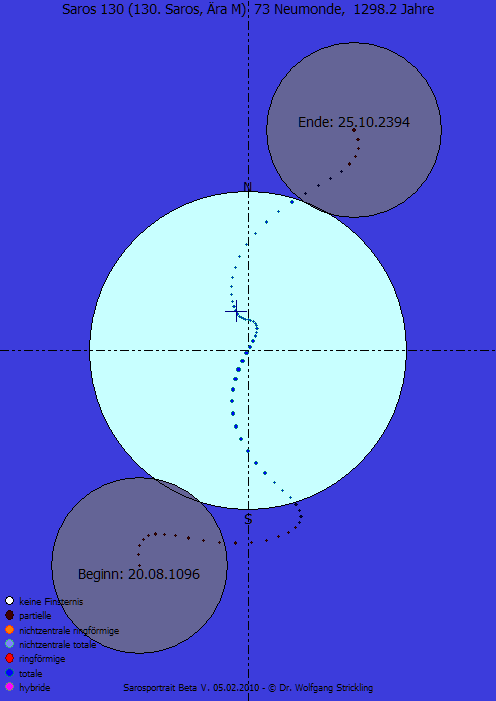 Saros History of the Eclipse


The total eclipse of 2016 is part of the Saros-Period 130, which lasts from the year 1096 and will end with its eclipse number 73 in 2394. In this period there will occur every 18 years and 18 days an eclipse. It is containing 30 partial eclipses. The other 43 ones are total, with durations between 01:14 minutes up to 6:57 in the year 1565. As usually some annular or hybrid eclipses occur in a Saros period, number 130 with exclusively total or partial ones is quite remarkable. The image left is showing a Saros-snail, indicating how the lunar shadow hits the earth at the maximum of each eclipse. Click into the image to enlarge. It was created with my Windows-software Sarosportrait.