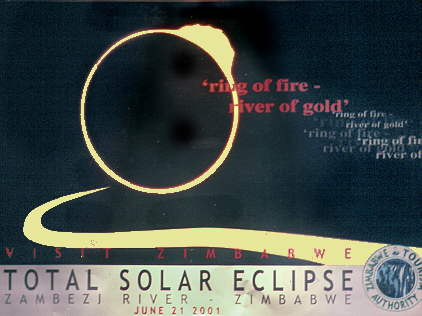 We observed the first eclipse of the millennium in Zimbabwe near Muzarabani, close to the Zambesi escarpment. Our camp was at 31° 01,45' east, 16° 24,90' south, 487 m height. Our group has had nearly 100 members, the tour was organised by Astronomie.de.

I took photographs on Fuji Velvia color slide film. To show details over the total corona, i made composits of slides with different expositions from 1/1000 s to 4 resp. 8 secs. First results can be seen below. For more enlarged pictures: click on them! 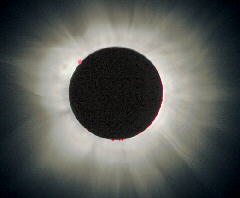 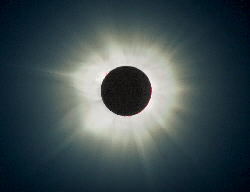 Some of my partial phases photographs are sandwiched to simulate a row exposition: 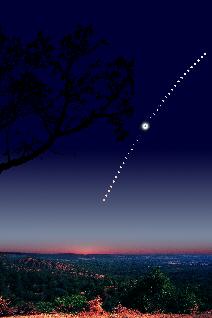 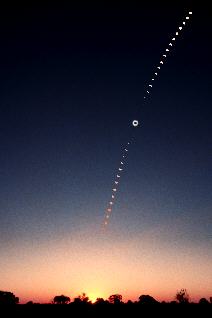 For obtaining pictures of the shadow bands, we videotaped a 1.4 * 2.4 m large white cloth on SVHS videotape.
A 3-seconds MPEG-1-Video (552 kB) is downloadable here (add 5 sec to timestamps!).

Two single frames of our video are shown below, videotaped by Andreas Dahm. Time is UT +2h: 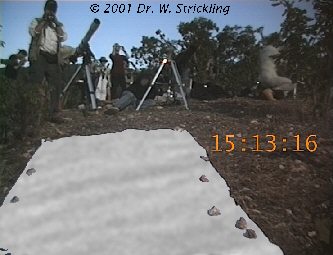 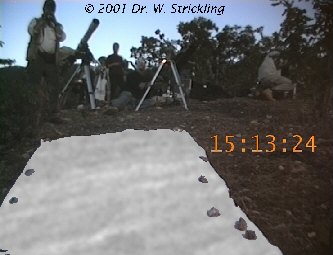 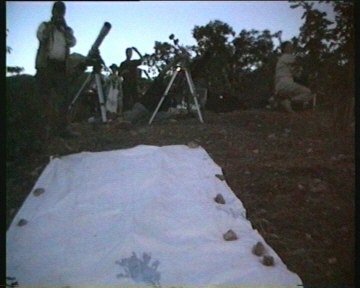 For showing the shadow bands on still pictures, i substraced an averaged picture (averaged from 25 single frames = 1 second) of the procection cloth from the original video sequence, using a 50% transition effect with of my video software.

Otherwise you see only structures of the cloth, as shown on the left...

My video was presented at the first Totality Day 2001 in Milton Keynes/England.

Discussion of the shadow bands video: 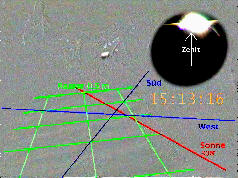 For analyzing my videos i superimposed an inverted sum-picture from 25 frames (= 1 sec) to the original video track with 50% transparency with my video software (Ulead Media Studio). So the unsettled background vanishes for measuring the cahanging structures in the picture. A 0.5 m square grid (green), cross with suoth and est indicator (blue), solar direction (azimut 308°, red) and a solar picture (cortesy  Gebhard Oelmeier!) is also superimposed. There might be slight unaccurancies with the orientiation (10°..15°), as i did not check them at the observation site. I had to extract these values at home from plant shadows on the videos... 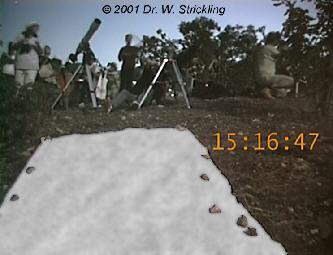 After 3rd contact they looked much more different. No one of our group saw them, but our video shows them for about 18 sec, lasting shorter, however.

Furthermore, they looked much more turbulent at remarkably lower contrast, not like the perfect bands before 2nd contact. In general they extended in north- southern direction and moving to west with appr. 1 .. 2 m/s speed. Their wavelength was 0.10 m .. 0.15 m (i. e. spatial frequency 6 .. 10/m) 7 sec after 3rd contact.

In both cases (2nd and 3rd cont.) the survival time of the single cells was in the range of about typical 0.5 sec to max 1 second.

The cause of the different orientation is the different inclination of the solar crescent to the horizon before and after totality. They are always orientated, as if they are an image of a distant lens. Only exactly on the centerline there will  be no rotation of the bands before and after totality.
Note the position angles. At 2nd contact (p.a. 349° to zenit), the crescent lied nearly parallel to the horizon, and the shadow bands seemed to extend perpendicular to the solar direction. mAfter 3rd contact, the crescent was inclinated 43 deg to the horizon (p.a. 127° to zenit), and the shadow bands were also inclinated to the solar perpendicular line by appr.
50°. 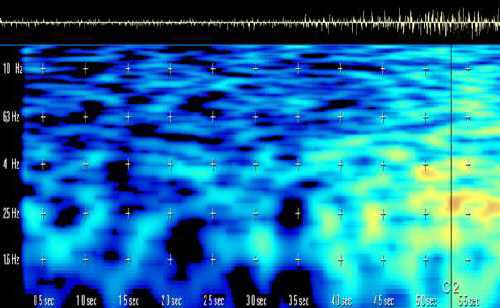 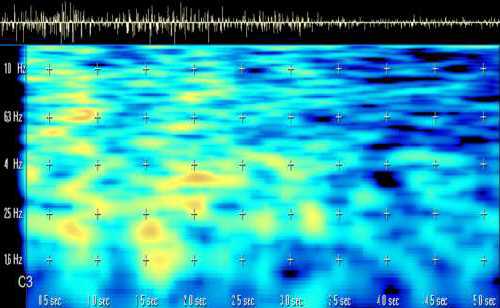 To study contrast an the development of the shadow bands in detail, i took with  LIMOVIE the intensity profils of a four pixel area of my cloth. With  SPECTROGRAM i made a power spectrum of the intensity plot. The upper graphs show the spectrum befor resecond contact (marked as C2), the graph right the development after third contact (C3). It can be seen, that the shadow bands do not develop continuously, but that there may occur short periods of less activity.

We had furthermore recorded the approaching an vanishing of the moon's shadow with three cameras on video. download here a quick-motion clip of those cameras (7 seconds, MPEG-2, 530 kB). (If you get problems in playing MPEG-2 files, download VLC media player or  Microsoft's newest newest media player. The standard one often does not play MPEG-2.) 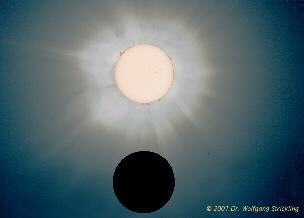 the orange line indicates the sky brightness at eclipse da and the day after in log scale, the red graph shows the temperature at 4-5m height, the grenn graph temperature at ground level and the blue line wind speed.

The eclipse and sunrise and sunset are marked. More detailed graph for the time of eclipse: 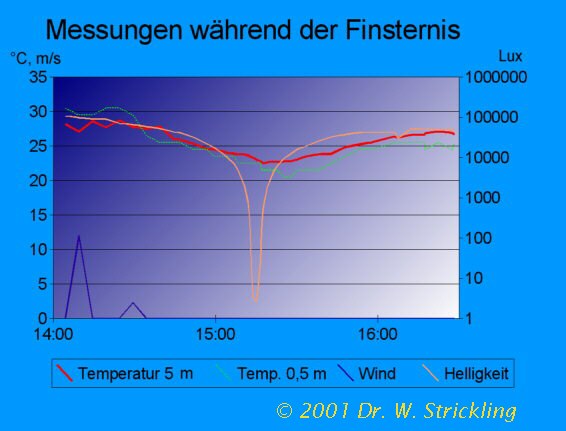 Note that the temperature at ground level has a higher amplitude and reaches it's minimum later the higher levels in the atmosphere. 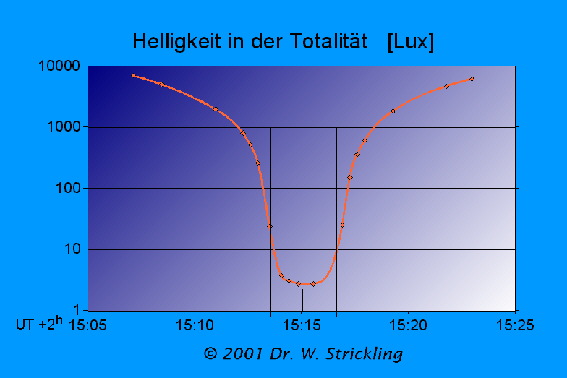 Tables with my complete measurements for download (7 kB text) and zipped tiff-files (317 kB) in full resolution.
Nice to compare: Bill ronald's temperature measurement (nearly the same place as ours!) 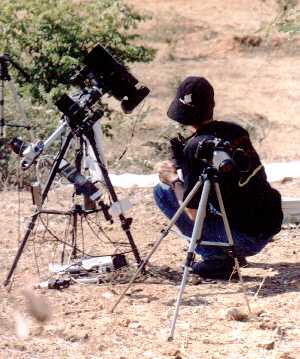 My Equipment. Courtesy Gisela Bertram for this qolden snapshot!

As mentioned, a Psion organiser II recorded weather measurements and photo cameras. More details on my eclipse Organiser webpage (German) and my technical documentation of the interface (English). 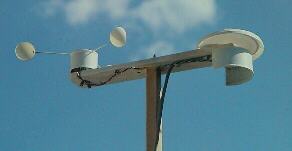 my combined wind and temperature and brightness sensor.

The sensor is the circuit "TSL230" (Texas Instruments), which converts light intensitiy to a frequency. It is mounted under a diffusor dome. The circuit can be varied in its sensitivity by canging the sensor chip area by a factor of 10 or 100. Additionally, the output frequency can be divided by 2, 10, or 100. So you get by simple adjustmend settings a dynamic range of more than 10^4. The output frequency can vary from < 1 Hz up to > 1 MHz. So it is possible to use one sensor for measuring light both at day and night. As the output is TTL-level, you can connet the circuit directly to the PC's parallel (printer) port or the input ports of my psion organiser extension box. The measured frequencies are computed and stored in a standardized manner due to senitivity and output division settings. These values are stored in the downloadable CSV-files (accuracy +- 20%).

Temperature reagistration was done by the circuit "LM 75" (National Semiconductors) for ground registration. Its resolution is 0.5 ° C. The more precise DS 1621 provided data at 4 m height.

The temperature can be read via a two wire line interface (I2C bus) directly and digitally by the PC or organiser.

The anemometer had three hemisperic shovels. Its rotation speed was registered by a light barrier with an accuracy of about 20 %.

All these sensors were mounted on a mast ca. 4 m above the ground.

Similar computer and organiser programs for cameras are found at:

back to my German  Homepage
my shadow bands explanation page
My eclipse observations 1999, 2003, 2005 (in German), 2006, 2008, 2009, 2011 (DE), 2012 (DE), 2015 (DE), 2016, 2017
My eclipse projects
Tables with meteo values
im schatten. Avirtual exhibition of my photos and texts of Adalbert Stifter (German language)
Bill Ronald's eclipse page of  Zimbabwe and his temperature measurement (nearly the same place as ours!)
My German eclipse Organiser page and technical documentation of the interface (english)